For anyone who has spent time in the Pecos Wilderness, this traverse connects some of its most beautiful and memorable places. At minimum a three day trip, this backpack through northern New Mexico’s signature Wilderness Area passes 5 lakes, crosses multiple meadows and connects the high peaks from the Truchas to Santa Fe Baldy. Many of these sections see few visitors and thus make good wildlife habitat, so take your time, enjoy the wildflowers if you’re so lucky and bask in the region’s wild splendor.

Go straight at the junction with NM-73 toward Llano. In Rodarte, turn left following the signs toward Santa Barbara Campground. After 6 miles, you will reach the campground. Park at the large lot on the left, just before entering the campground.

From the parking area, hike through the campground, saying on the lower side of the loop. At the top of the loop, the Middle Fork Trail – Trail #24 takes off following the Rio Santa Barbara upstream. The well-defined trail will start on the west side of the river and after a shortways pass the well-signed, but little used Centennial Trail – Trail #100. After about 1 mile, the trail then crosses into the Pecos Wilderness and then crosses the creek to the east side and continues to follow it upstream.

At this point, the trail will climb significantly above the water, transitioning from riparian vegetation to fir and pine forest. After another 1/2 mile, you will come to a junction with the West Fork Trail – Trail #25. Go right to join the West Fork Trail, which drops down back toward the river.

After passing through a series of small meadows, the trail cross back to the the Middle Fork of the Santa Barbara, follows it upstream before switching back to the west to join the West Fork where it continues upstream. From here, the tall walls of the canyon start to rise above the trail, representing some of the best big canyon geography anywhere in the Pecos or northern New Mexico.

The trail passes through a series of large meadows offering amazing views of Chimayosos Peak at the top of Santa Barbara Divide. 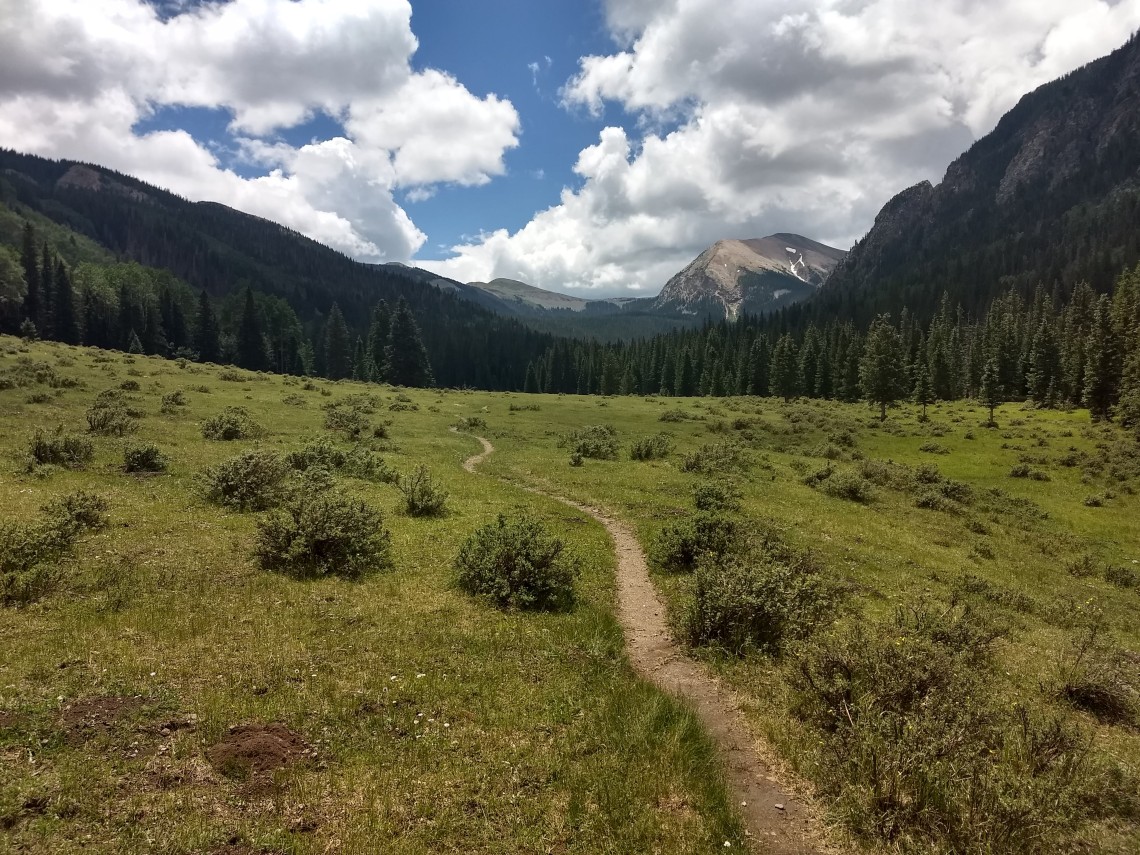 A couple miles past the junction with the Middle Fork, the trail cross to the west side of the creek. Up to this point, any climbing has been fairly minimal, but from this point, the trail departs from the creek and begins ascending at a much steadier clip from here to the top of Santa Barbara Divide.

Despite leaving the West Fork, there are still plenty of side streams and other water sources. This first section of trail is very well cleared and easy to follow. The upper section of trail has some deadfall, but compared to many other Pecos trails this year is in very good condition. In places the trail switchbacks, in others it just slowly meanders uphill on the western wall of the canyon.

The final 1/3 mile to the top of the divide traverses across an open scree slope in long, low angle switchbacks. It briefly reenters some tree cover before making the final climb to the small saddle between Chimayosos and North Truchas Peak.

NOTE: Be mindful that if you are starting a normal time from Santa Barbara during July or August, there’s a good chance you’ll be reaching the saddle during mid-afternoon, peak monsoon window.

We were lucky enough not to have any storms, so we were able to enjoy the views before making the last mile to our campsite at the Truchas Lakes. From the saddle, there are a couple of trail options. To reach the lakes, go straight, to follow the faint trail downhill. After a couple hundred yards, you’ll reach another view point, with a fantastic vantage of Trailriders Wall, which you will traverse the next day.

Continue downhill until you reach the unmarked junction with the Skyline Trail – Trail #251. Turn right. You’ll go uphill briefly before reaching a bench for the last 100 yards to the lake. There are a number of campsites surrounding the lake. The best of which is downhill from the lake following the outlet stream on the lake’s west side.

Naturally it rained overnight, but not until past 9 just as we were jumping into our tents for the night and like any New Mexico morning, we awoke to blue skies.

To continue on the loop, follow the trail along the lake’s south side and follow the western outlet downstream to the junction with the no longer existent  North Azul Trail – Trail #264. Turn right to remain on the Skyline Trail, which traverses, twists and slowly climbs along the base of the southwest flanks of Truchas Peak. The trail eventually enters a large bowl with grassy walls climbing high above the trail below. Marmots are common here, but if you are lucky, as we were, you may also have the opportunity to view Rocky Mountain Bighorn Sheep.

From this bowl, the trail descends and traverse until reaching another junction with the North Azul Trail. From here, you will turn right, making the .3 miles until you reach the northern end of Trailriders Wall.

Once atop Trailriders, continue south, climbing higher along the ridge for the next 2+ miles. This is my absolute favorite place in the Pecos and in the morning, the weather is typically dependable enough that you can enjoy it and not feel like you should be in any hurry.

In late July, thanks to our large snowpack, the wildflowers were fantastic and the views – to the north and south, the Truchas and Pecos peaks, to the east and west, the entire Pecos Wilderness and Espanola Valley and Los Alamos – epitomized what makes this place so special.

The southern end of the wall sits atop a steep drop off that curves east into the upper Pecos watershed and offers the definitive view of this unique feature. From here, the trail drops for the next .8 miles, passing the junction with the Sebadilloses Trail – Trail #245 to Pecos Baldy Lake.

Continue past the lake, climbing up to the small saddle where the East Pecos Baldy Trail – Trail #275. If you’ve made good time, feel free to make the 1 mile roundtrip sojourn to the peak, but considering the already long day, we continued along the Skyline Trail without detour.

From the saddle, hike diagonally across the small meadow to pick up the Skyline Trail again. The next .8 miles follows the trail through unburnt mature forest. This section of trail is in good condition, although steep in parts as it follows the top of the Rito Perro drainage.

Eventually, the trail contours out of the drainage and quickly enters a burn area. Fortunately, the trail remains easy to follow despite some deadfall. One of the beneifts of the burn was the wildflowers, which far surpasses those of Trailriders.

Eventually, you will reach the junction with the Rito Perro Trail – Trail #256. For the past number of years, this next trail segment to Horse Thief Meadow had been rendered almost impassable, but the trail had recently been cleared and except for some downfall, the entire 3.8 mile section was a relative breeze. Also, thanks to the fire, there were some pretty spectacular views, along with many more wildflowers. 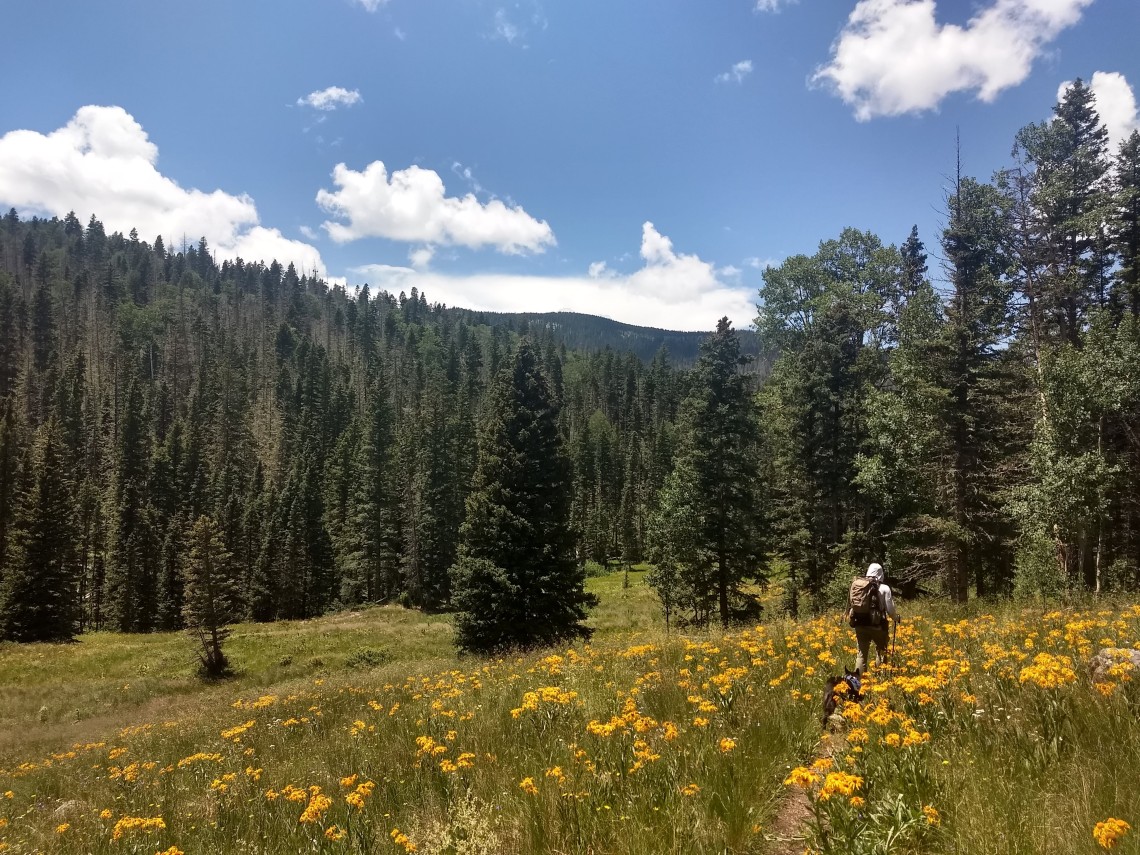 In this section, the trail contours across the open hillside between Rito Perro and Panchuela Creek before descending into Panchuela, following it fairly far upstream before crossing the creek and climbing out again. After ascending the next ridge, the trail descends once again, this time into the Horsethief Creek drainage. For a while, the trail remains above the creek, but eventually drops in and passes through a series of lovely meadows before reaching Horsethief Meadow proper.

From a signed junction, the Skyline Trail, crosses the creek and reenters the forest climbing up and away from the meadow to the south. This section of trail is steep in parts, but only lasts for about .5 miles before reaching a plateau. This flat section only lasts for about another half mile until the trail descends again to the junction with the Cave Creek Trail – Trail #288.

Turn right to remain on the Skyline Trail. After crossing Cave Creek, the trail climbs modestly before reaching some steady switchbacks that slowly meander uphill. In this 1.7 mile segment to the junction with the Johnson Lake Trail – Trail #267, the trail contains both flat sections and sections that climb steadily, but not steeply.

At the junction with the Jonson Lake Trail, you have the option of continuing straight to Stewart Lake, which would take 3.6 miles off the trip’s total length, or turning uphill to the much less visited Johnson Lake.

The 1.8 miles to Johnson Lake are all mostly uphill, but are rarely ever steep. The trail had been recently cleared so the hiking was easy, despite being tired after the long day. After circumnavigating a meadow at the start of the trail, it completes three switchbacks, the third of which roughly marks the half-way point to the lake. From there, there are few geographic features to mentally guide you, so keep your head down and celebrate upon reaching the lake and not a moment sooner.

Hike the 1.8 miles back on the Johnson Lake Trail to the Junction with the Skyline Trail. Turn right towards Stewart Lake. The next 1.6 miles to Stewart are a cruise and will be much appreciated after the previous day’s long mileage.

After enjoy the views of Stewart Lake, continue for another .6 miles to the junction at the outlet of Katerine Lake. Turn right, to follow the fast flowing creek upstream. The next .6 miles are some of the steepest of the entire trip. At first, the trail stays close to the water, but eventually switchbacks away to the right and eventually reaches a junction with the Winsor Trail – Trail #254.

At this point, you will leave the Skyline Trail – the first time since the end of the first day. Go straight (left) to follow the Winsor Trail, which will return to the creek before crossing it and continuing south toward Spirit Lake. The trail climbs slightly before meandering towards Spirit Lake. 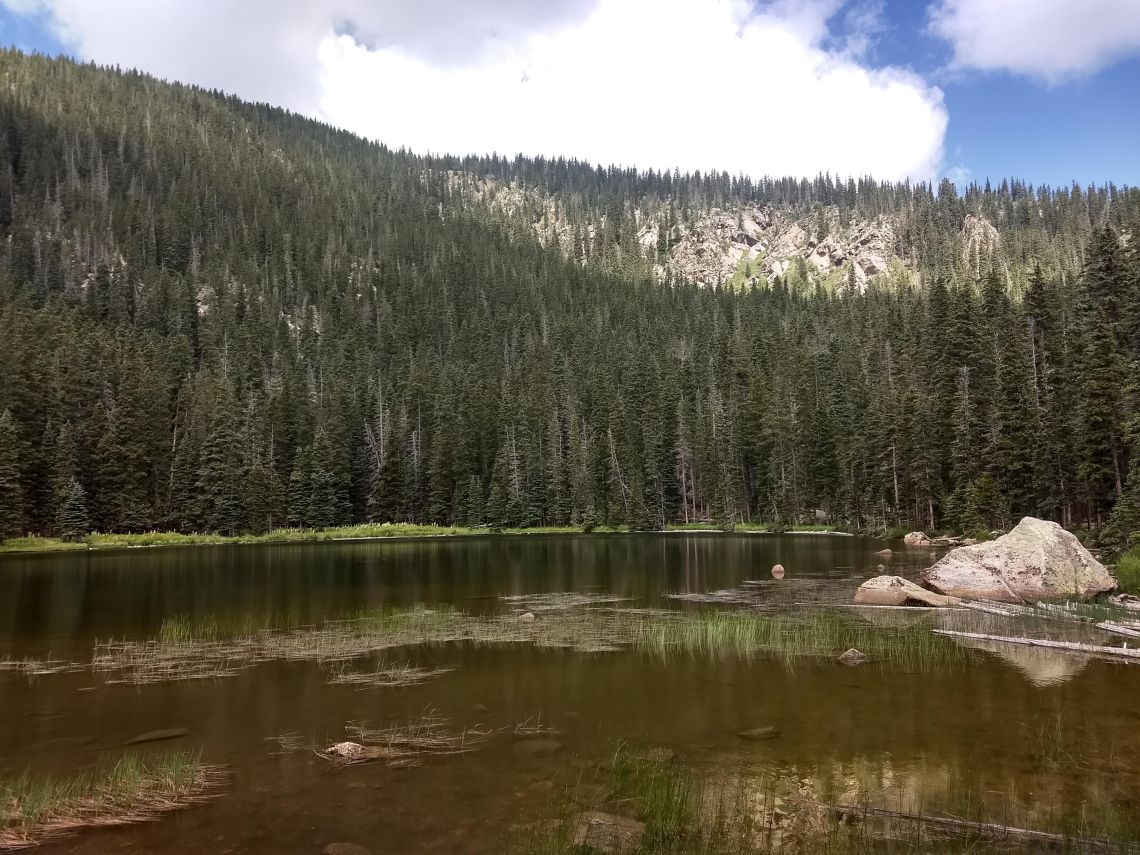 Passing the lake, the Winsor Trail slowly climbs to the small notch between Penitente Peak and small know below Santa Fe Baldy for about 1.5 miles. At the saddle, you will briefly rejoin the Skyline Trail for the next .5 miles to Puerto Nambe where the Winsor Trail splits again to complete the final 4 miles back to Ski Santa Fe, passing a number of small side trail along the way.

Per usual, we encountered only about 10 people for the first 34 miles of our trip, but once on this final section of the Winsor Trail, we passed dozens in little more than an hour. It’s a stark reminder that you will soon reenter civilization, but also one that underlines how unpeopled the majority of the Pecos Wilderness remains.

Any hike described on this website should be attempted at your own risk. Trail conditions can change even in a matter of weeks, so while this site attempts to provide the most up-to-date information possible, it makes no guarantees about the conditions of the trails described. Also, this site should be consulted as a resource and not considered a replacement for a map, compass, GPS or common sense. Be prepared and enter the woods at your own risk

There was an error retrieving images from Instagram. An attempt will be remade in a few minutes.